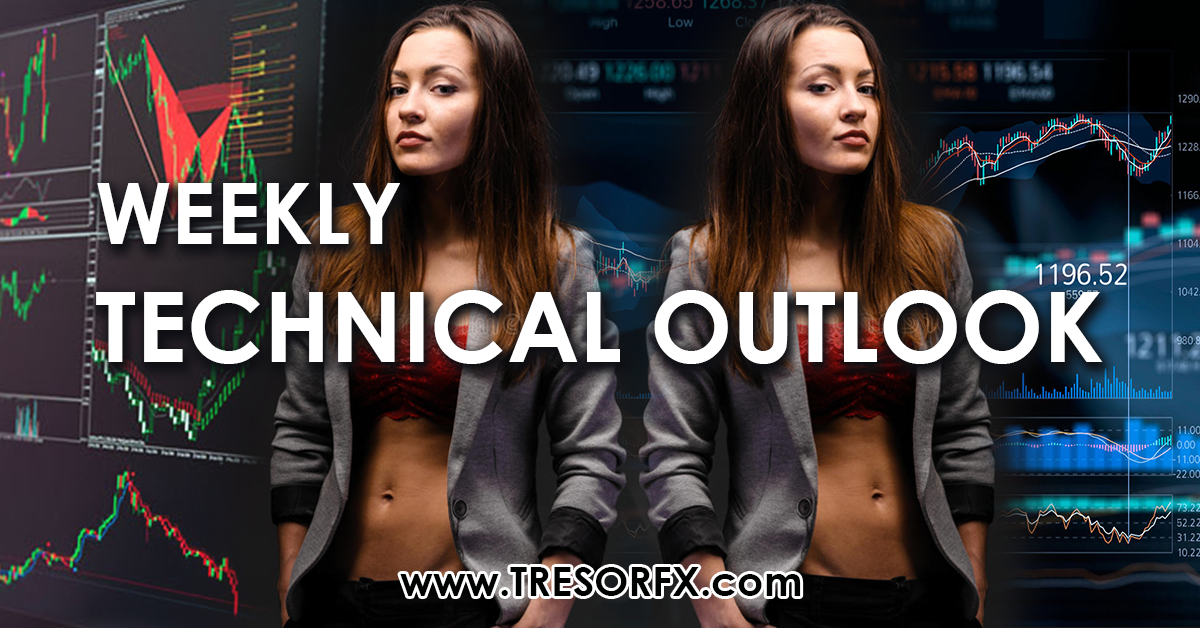 EUR/USD bulls went on the offensive last week, adding more than 170 points into the close. The chart directed focus to the recent break of resistance at 1.0873, the 2016 yearly opening level, after bottoming off channel support, taken from the low 1.1109. Sustained upside this week could lead to channel resistance, extended from the high 1.1569, entering the fight.

Support on this timeframe can be found around the 1.0990 neighbourhood, with a break exposing 1.0925 as a possible platform.

Led by continued underperformance in the US dollar index, Friday established firm footing above the key figure 1.10, though not before dipping to session lows of 1.0950. Modest resistance forms around 1.1055, with headspace north of this figure seen to February’s opening level at 1.1094 and the round number 1.11. Indicator-based traders may also want to note the relative strength index (RSI) is flirting with overbought territory.

On the data front, German prelim CPI ticked higher than expected, though price action remained around pre-announcement levels. Out of the US, personal consumption expenditure reported mildly lower-than-expected numbers, as did the US consumer spending metric, consequently triggering modest selling.

Weekly price shows potential for more EUR/USD upside this week until crossing swords with channel resistance. Elsewhere, daily flow invites an approach to resistance coming in at 1.1075, a level that could hamper upside this week, having seen 61.8% Fibonacci confluence nearby.

Resistance on the H4 timeframe at 1.1055 may be problematic for longs this week, though with daily price suggesting a run to 1.1075, H4 resistance may suffer with price pushing for a test at 1.11. Given the close connection with the 200-day SMA on the daily timeframe, a pullback from 1.11 (and February’s opening level at 1.1094) is certainly a possibility this week and may be something sellers want to investigate.

A break through 1.11, on the other hand, offers a strong cue we’re heading for the weekly channel resistance.

Since the beginning of the year, the unit has been languishing beneath long-standing trend line resistance, pencilled in from the high 1.5930. Last week, however, witnessed sellers strengthen their grip and shake hands with the 2019 yearly opening level at 1.2739, whipsawing through demand around the 1.2939 region (black arrow) and registering fresh YTD lows.

The week concluded chalking up a mild end-of-week correction off 1.2739. A breach of the said support would side-line hopes of recovery and shine the spotlight on support from 1.2369.

In conjunction with the weekly timeframe, we can see price action on the daily timeframe ran into a particularly interesting area of support at 1.2769, a 127.2% Fibonacci extension at 1.2738 and the 200-day SMA. Note the said SMA has been flattening since mid-October 2019.

Uncertainty regarding the future UK-EU trade relationship weighed on sentiment Friday, with price running through support at 1.2824 and the round number 1.28. Price movement bottomed 25 points north of 1.27, pulling back and revisiting 1.28 and 1.2824 as resistance. Technically, the pullback is likely due to higher-timeframe support making an appearance.

Regardless of the unit clocking YTD lows last week, the combined weekly and daily supports between 1.2739 and 1.2769 is likely enough to encourage further upside this week. The close back above 1.28, albeit holding beneath H4 resistance at 1.2824, may be considered a bullish signal by some. Of course, a break of the current H4 resistance, followed up with a strong retest off 1.28, is likely a preferred scenario, targeting 1.29 as the initial base.

Erasing more than 115 points on the week, AUD/USD is now tilting towards support coming in at 0.6359 this week. Eight out of nine weeks has seen the pair register losses, since topping a touch south of the 2019 yearly opening level at 0.7042, and completing a five-month rising wedge pattern.

Note the primary trend has faced south since 2018, and we’re now testing decade lows in this market.

After violating channel support, taken from the low 0.6677, and later retesting the lower boundary as resistance, renewed selling emerged, with Friday aggressively grasping support at 0.6508.

0.6301 remains in view as the next support target, in the event we press for lower ground over the coming weeks.

Friday had the H4 candles swing to multi-year lows at 0.6433, breaching the 0.65 handle and channel support, taken from the low 0.6850. Due to the pair staging a reasonably strong recovery in US hours, however, the week ended with price marginally reclaiming 0.65+ status.

In terms of resistance on this scale, the 0.6542 February 26th low could hinder upside this week. Headspace above this barrier, nonetheless, could swerve towards the 0.66 handle and channel resistance, etched from the high 0.7031.

While a rebound higher could form on the H4 and daily timeframes this week, the threat of further downside materialising on the weekly timeframe may deter buyers in this market. The long-term primary trend should also not be overlooked.

As such, buyers may want to approach with caution, while sellers likely have eyes on a H4 close back beneath 0.65 for a run to 0.64 on the H4 scale, followed by weekly support at 0.6359.

Shedding more than 350 points on the week, recording its largest weekly drop since July 2016, USD/JPY extended the prior week’s rejection off Quasimodo resistance at 112.14 and toppled the 2019 yearly opening level at 109.68. Aside from support possibly developing off the 107.65 January 8th low or the 106.48 September (2019) 30th low, the next support target can be seen around Quasimodo support off 105.35.

Support falls in relatively close by at 106.96, a Quasimodo support, followed by support coming in at 106.80. The 200-day SMA may offer resistance on this timeframe, as might the recently broken trend line support.

Friday’s precipitous decline, along with waning US Treasury yields, observed the pair jumped through a number of key technical support levels. The unit wrapped up the day aggressively whipsawing through 108, driving the relative strength index (RSI) deep into oversold territory, while mildly paring losses into the close.

Seeing the 200-day SMA currently circulate around the 108.40 region, a response from the H4 resistance area at 108.62/108.47 is likely in store this week, therefore sellers may want to make a note of this zone. The fact we also pierced 108 and the 107.65 January 8th low, likely tripping sell stops, adds weight to further selling this week, targeting the 107 handle on the H4 (the next downside target on that timeframe), shadowed by daily Quasimodo support at 106.96.

Coming off a two-week modest correction from 1.3329, last week eclipsed the 1.3382 September 2nd high and grasped trend line resistance, from the high 1.3664, and the 2017 yearly opening level at 1.3434. Another worthy contender, in terms of resistance on this scale, is the Quasimodo formation at 1.3520.

As for support on this timeframe, a local trend line resistance-turned support, pencilled in from the high 1.3382, may enter view, with a break of here possibly clearing the runway to support at 1.3059.

After rushing resistance at 1.3348, now a serving support, Friday’s action extended upside to multi-month tops at 1.3464, forming a clear-cut shooting star pattern (considered a bearish indicator at peaks) off the 2017 yearly opening level mentioned above on the weekly timeframe at 1.3434.

Friday saw the candles test 1.3450 and pullback amid US hours, closing marginally south of 1.34 into the close, perhaps clearing downside to H4 support at 1.3361, shadowed closely by support at 1.3336. Note also the relative strength index (RSI) peaked at 80.00, before exiting overbought waters on Friday.

Owing to H4 concluding modestly beneath 1.34, and weekly price testing resistances, along with daily flow chalking up a bearish candlestick configuration, downside may be on the cards today/early week. Aggressive traders may short at the open, with protective stop loss orders positioned accordingly; conservative traders, nevertheless, may wait and see if a retest at 1.34 forms before pulling the trigger. This helps identify seller intent and avoid unnecessary losses on whipsaws, which are common viewing around psychological levels.

Trend line support-turned resistance, extended from the low 0.9187, elbowed its way into the spotlight two weeks ago, with healthy follow-through selling materialising last week. The 2018 yearly opening level at 0.9744, as you can see, ceded ground, sending the unit to lows at 0.9609.

A waning buck and intense flight-to-safety pulled USD/CHF to 0.9609 Friday, its lowest level since September 2018. February’s opening level at 0.9636 held as support, albeit suffering a rather aggressive whipsaw. January’s opening level at 0.9671 remains a resistance. The psychological level at 0.96 is also of interest, as is 0.97 as resistance. With respect to the relative strength index (RSI), the value fluctuated around oversold waters since the beginning of the week, and remained as such into the close.

Quasimodo support on the daily timeframe at 0.9600 aligns with the round number 0.96 on the H4 scale, therefore offering confluent support at this region this week for a potential rebound higher. Round numbers are prone to whipsaws, so traders may still seek additional confirmation off 0.96 before committing.