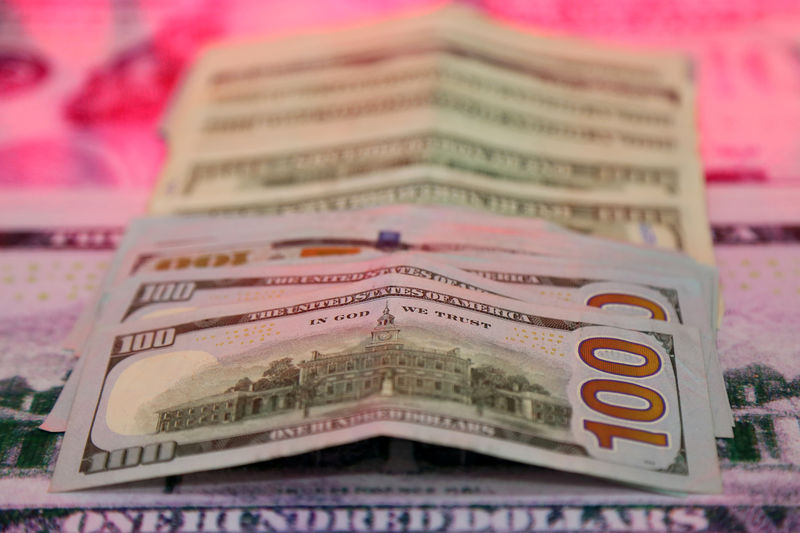 TOKYO (Reuters) – The dollar hovered near a six-week low versus the yen early on Thursday, weighed down against its safe-haven Japanese peer as risk aversion gripped broader markets amid concerns that the U.S.-China trade conflict could escalate.

Markets were nervously awaiting the start of two-day trade talks in Washington later in the global day to see if Chinese negotiators can convince the White House to back down on a threatened tariff hike on Friday.

The dollar has sagged against the Japanese currency, which has advanced against a number of its peers. The yen tends to attract demand in times of political strife and market turmoil.

Expectations that the United States and China would reach an agreement soon to end their trade war have been upended this week, sending investors fleeing from riskier assets. Global stocks have retreated and government bonds have surged in turn.

Washington has accused Beijing of backtracking on commitments made during trade negotiations and U.S. President Donald Trump has threatened to hike existing tariffs on Chinese goods on Friday and impose fresh levies soon if there is no deal.

Trump said on Wednesday he would be happy to keep tariffs on Chinese imports, prompting Beijing to threaten retaliation.

“The yen owes much of its strength to gains made in the cross currency market. ‘Risk on, risk off’ has been the main market driver and the euro has been stuck in range as a result,” said Shin Kadota, senior strategist at Barclays (LON:BARC) in Tokyo.

“While the possibility of the upcoming U.S.-China trade talks falling through is not yet a main scenario, the currency market is gradually beginning to price in such a likelihood.”

The Australian dollar traded at 76.89 yen, not too far from a four-month low of 76.79 reached on Monday. The Aussie has shed roughly 1.5 percent against the yen this week.

The euro struggled near a four-month trough of 123.09 yen, having fallen 1 percent so far this week.

The dollar index against a basket of six major currencies was little changed at 97.582.

The kiwi had slumped to a six-month trough of $0.6525 on Wednesday, when the Reserve Bank of New Zealand (RBNZ) cut interest rates to a record low of 1.5 percent.

But the currency has managed to bounce back as the RBNZ did not give a strong indication of upcoming easing, saying interest rates were “balanced” at the moment.